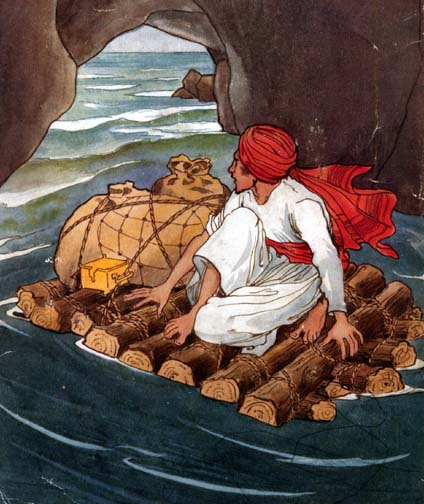 Sindbad told of the fourth voyage.

"Once again a restful, luxurious life bored me. My wandering heart led me to take another voyage on a merchant ship. Bad luck was our constant companion even as we began the voyage. A while after our ship set sail, a storm drove it into rocks and our ship broke. Many of my companions drowned. The survivors like me held on to a rock till the high waves subsided and so were saved. We managed to hold on to some woods from the shipwreck. We floated with the woods and soon reached an island. There ill luck struck once again. Some Negroes who inhabited the island captured us. They offered us some herbs to eat. I felt suspicious and did not eat them but my hungry companions ate them. They started behaving like mad men. As they were not in their senses, they could not do anything. The Negroes then offered my companions some boiled rice. I ate some but my companions ate a lot. This went on for some days. My companions grew fat day by day. One fine morning, the Negroes seized some of my companions, cooked them in a large vessel and ate them up. They did not get me for I was too thin.

One night I managed to escape and reached the shore. There I saw people gathering pepper. I told them my tale and they took me to a nearby island. They introduced me to their king. I lived in the king’s palace as the royal guest. One day, I went around the island. I observed that most people rode horses but none of them had saddles or stirrups. I thought of gifting the king with these, so I got some leather to make them such sets. When I gifted these to the king and told him of their advantage, he was very happy and thankful. He said, "Sindbad, my friend, you've made riding such a pleasure."

When the courtiers saw the Saddle, they as well as the subjects ordered for more to be made. I got busy making more such items and earned some money. Then one day the king called me and '''Sindbad, in return for all you've done I give a lady of my haram in marriage to you.'"

I was not at all keen to marry anyone but I relented so as not to the king's feelings. When the lady was introduced to me, I was speechless. She was indeed a very beautiful woman and had a very sweet smile, too. She was soft spoken and humble. I married her according to the rituals of the island and spent a happy life with her.

But as ill luck would have it, she fell sick a few months later. The severe illness caused her death and I was very grieved. But more, misfortunes lay in store for me. The island's custom was such that I was to be buried alive with my wife's dead body. All my pleas for an exception were in vain. So it was that amidst a grand traditional funeral ceremony my wife was buried. Alongside her grave was another in which I lay down alive. Some food and drink enough for seven days was buried in the grave with me. Once, the grave was shut with a heavy stone. There was darkness all around me and desperation in my heart.

My grave was actually in a cave mountain. In desperation, I felt around in the darkness to find some way to get out. I ate some of the food and drank left for me but, after seven days, even that was finished and I had nothing to do but wait to meet death.

As I lay there in silence, I heard a sound. It was as if some animal was rustling around. I moved in the grave and tried to look around the cave. I seemed to see a shape in the dark that moved away when I approached. I thought there must be a way from where the animal had got in, which meant there was surely a way to get out. With this hope in my heart, I followed the shadow at a distance. After about a quarter of an hour of crawling in the dark cave, I saw a dim ray of light. It was coming in through a crack in the rocky walls from which the creature had squeezed into the cave. I went out through the crack with some difficulty and to my joy I found myself on a deserted beach of the island.

I remembered that my wife had been buried with many precious ornaments and gems adorning her body. I went back into the cave and reached my wife's coffin. I gathered as many gems as I could and came out of the cave again. Perhaps God heard my prayers so I saw a merchant ship heading for the beach. The captain saw me waving cloth and took me up his ship. Then I told him how I happened to be on that Island.

Soon the ship returned to Baghdad when a comfortable, wealthy life awaited me once again." Sindbad sighed and said, "I had an adventurous fifth voyage about which you will hear at the dinner table tomorrow."

The guests went off with a promise to come again. Sindbad bid a farewell to Hindbad to whom he gifted a hundred gold coins once more.